Tonnes of firewood, woodchips, charcoal and mill-waste were produced from native forest over the past 5 years.

of publicly owned jarrah and karri forests are logged or cleared every year.

The announcement by Premier McGowan that native forest logging will end by January 2024 is a major breakthrough.

The South West forests’ profound climate and biodiversity values have been recognised, logging of native forests is finally coming to an end, and WA is moving into a new and long-awaited era of forest management.

While the recent announcement is great news and is rightfully being enthusiastically received, the job is not yet done. The next 2 years, in the lead-up to the next Forest Management Plan (FMP), are going to be critical.

We now have two major tasks ahead of us and we welcome your involvement. We will work to:

(i) Any planned thinning of mine-site rehabilitation and immature regrowth, which the State Government has recently said will be conducted for forest health reasons during the term of the next FMP, must be designed by ecologists, not foresters; genuinely put the forests first; and not end up being logging by another name;

(iii) That Alcoa’s proposed expansion of bauxite mining is rejected through the upcoming EPA processes and other opportunities, and that other proposed mining expansions are prevented by forests being securely protected in conservation reserves;

(iv) That there is an overhaul of fire management, based on recommendations from an independent scientific review of the prescribed burning program;

(v) That Bibbulmun Custodians co-design and implement future management objectives and practices in the forests.

Every day, an area the size of 10 football fields is logged or cleared in the South West of WA.

This unsustainable and destructive practice is destroying wildlife habitat; releasing huge volumes of stored carbon into the atmosphere; and further degrading the forests in this Global Biodiversity Hotspot.

Over the past 150 years, more than 90% of the forests in the South West of WA have been logged or cleared with massive impacts on wildlife, biodiversity, cultural heritage, rainfall, water, soils, climate and the overall ecological health of the region.

After native forest logging and clearing, about half of all the biomass that has been logged (ie: branches, logs and under-storey trees) is left behind and burned in the routine post-logging fire. Then, about 85% of all the wood sold becomes paper, firewood, charcoal and mill-waste.

Only 15% of the wood sold becomes actual timber for building, furniture and fine woodcraft. 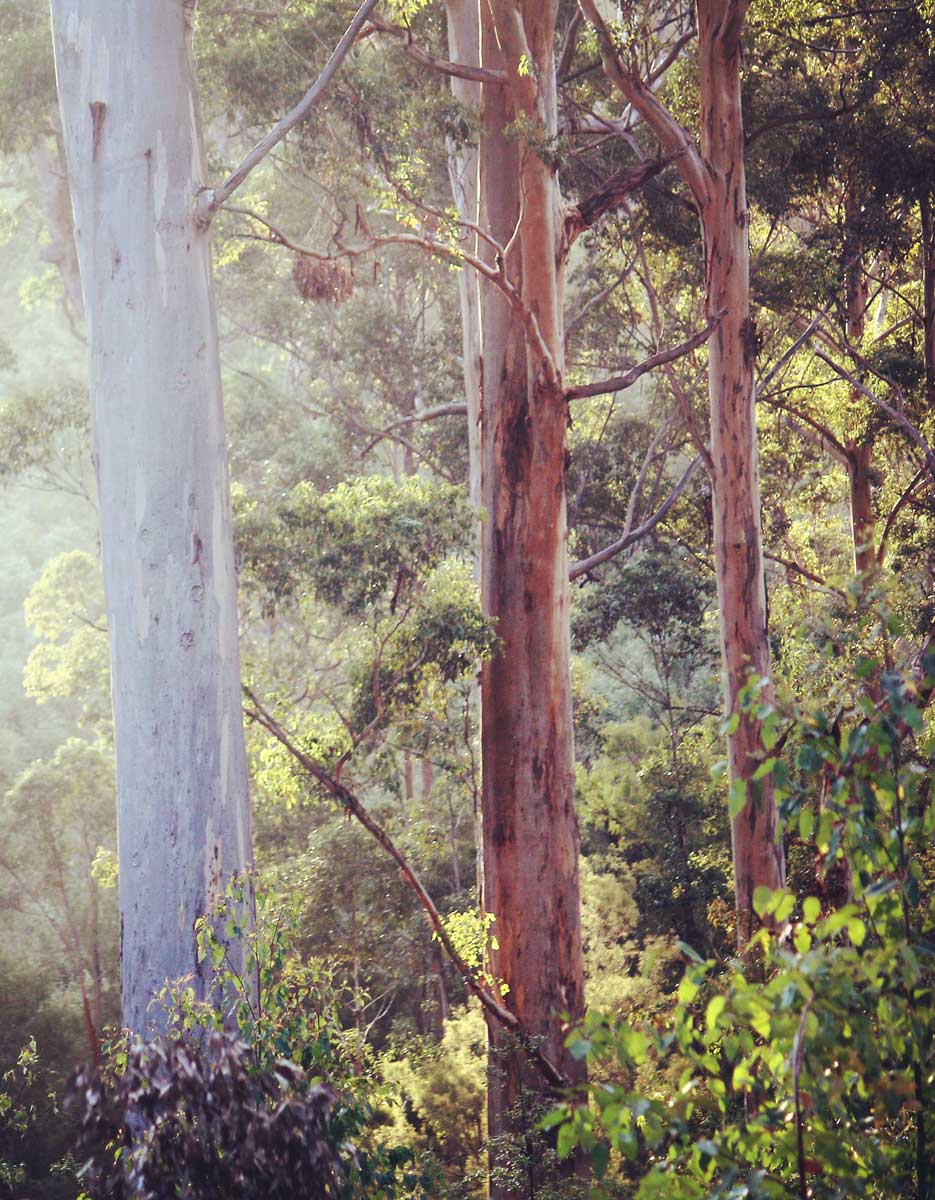 There is a growing community demand in WA, as well as around Australia and the world, for native forest logging and clearing to stop, and for the timber industry to be transitioned to sustainable plantations and farm forestry. The decision by the WA Government to end native forest logging by 2024 has been met with jubilation across the forest regions of WA.

Business owners, farmers and tourist operators are all welcoming the new era of sustainable forestry based on plantations. Our forests are worth more standing than as charcoal, firewood and wood chips. The forests are valuable for climate and biodiversity, they also support many businesses from beekeeping to tourism.

There is a growing community demand in WA, as well as around Australia and the world, for native forest logging and clearing to stop, and for the timber industry to be transitioned to sustainable plantations and farm forestry. The decision by the WA Government to end native forest logging by 2024 has been met with jubilation across the forest regions of WA.

Business owners, farmers and tourist operators are all welcoming the new era of sustainable forestry based on plantations. Our forests are worth more standing than as charcoal, firewood and wood chips. The forests are valuable for climate and biodiversity, they also support many businesses from beekeeping to tourism.

Mick Ryan, of Wild at Heart – Pemberton is celebrating the decision to put an end to native forest logging because it means that the area’s natural beauty will be preserved, local businesses will flourish, and the workforce will diversify.

Cullen Wine’s managing director, Vanya Cullen, enthusiastically welcomes the decision to stop native forest logging as it will stimulate more jobs for regenerative agriculture and tourism. With tourism being the backbone of Margaret River, Vanya says that this is the best thing to happen for the region. 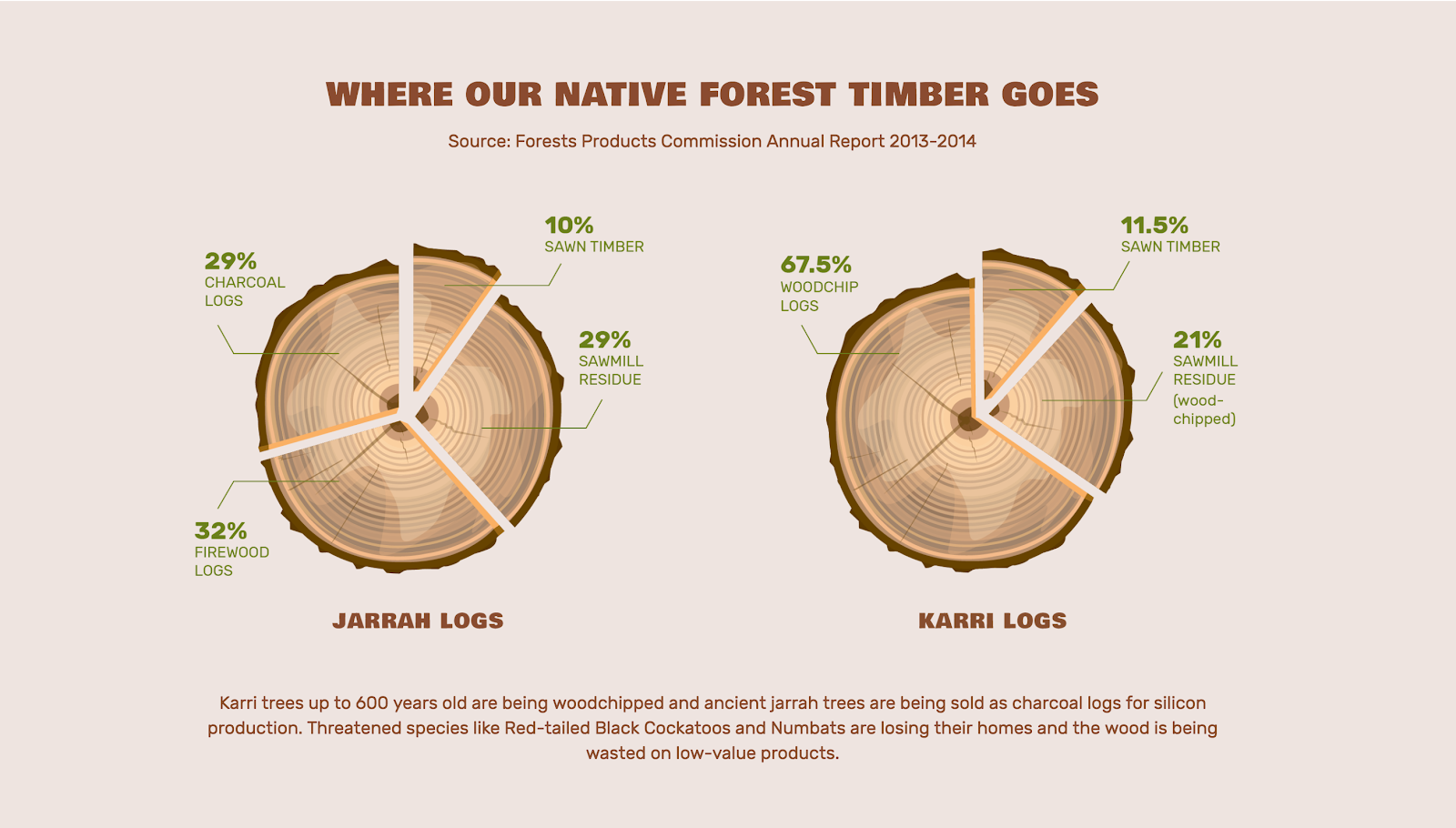 It is time for us to complete the transition out of native forest logging and use plantations and farm forestry for our timber needs.

What we are doing to protect native forests

​​For 31 years, we have been prosecuting the case for the protection of native forests. We will continue to do this until the forests are fully and securely protected. In the near future, opportunities for communities to have a real impact on the issues discussed above will be made available to the public, so stay tuned!

In the meantime, WAFA will still be running ongoing programs in the South West forests such as Forest Watch, and regular tours to keep educating the community about the incredible values of the forests, and the threats that they face. Screenings of Cry of the Forests are continuing too, and you can find out where this fantastic film is showing and buy tickets here: https://cryoftheforests.com.au/screenings/

We will also continue to advocate for an expanded farmed wood sector, where high-value hardwood timber trees are grown in association with cropping and grazing.

Our Forests For Life Farm Forestry and Landcare plan is to grow 40 000 ha of high-value hardwood timber trees in the South West and Great Southern and revegetate a minimum of 4000ha of riparian zones and other priority areas on participating farms. Read more about the FFL plan here.

You can find out more about WAFA’s work, our vision and mission and what we’ve achieved so far on the About Us page

WAFA is a community with a long and proud history. WAFA is made up of over 20 member groups, hundreds of activists, conservationists and campaigners backed by thousands of advocates, followers and patrons.

We’d love to have you on board. Everything we do, and everything we achieve, is made possible because of our community team. There are a number of ways you can immediately get involved and help to make a big difference for the forests.

We are funded by people like you, who commit to regular donations. Private donations and grants allow us to stay independent and effective.

When you support us financially, you are funding a grassroots and strategic campaign team, enabling us to work consistently for forest conservation including by employing dedicated, experienced campaigners and communicators, as our director, community organiser, and media officer.

This means that we can sustain our campaigning day in and day out; that we can reliably build towards our goals; and that we are able to take up opportunities to build our community and our case for forest protection.